The Best of Bogart Collection on Blu-ray 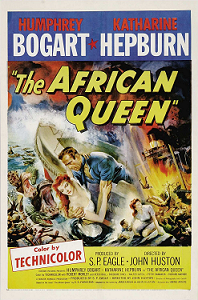 The African Queen, starring Humphrey Bogart and Katharine Hepburn is a joy to watch. Although it is a novel written by the Britain C.S. Forester with English and Canadian characters, it is a classic reminder of the way Hollywood, and to a greater extent, the United States used to view our place in the world. “The spirit, the will to win and the will to excel – these are the things that endure and these are the qualities that are so much more important than any of the events that occasion them.” Vince Lombardi.

The movie The African Queen was based on the book of the same title written by C.S. Forester. The story was cast in Africa at the outset of WWI. In the original novel by Forester, Charlie Allnutt and Rose Sayer suddenly find themselves at war with Kaiser Wilhelm II ‘s Germany even though they are deep in the jungles of Africa and thousands of miles from home. The characters, a boozing captain who can fix anything in the middle of nowhere, and a pious, or self-pious, Victorian spinster, team up. They set off in a patriotic yet foolhardy plot to sink the large German gunboat, Königin Luise, in a rickety, flat-bottomed, rust-bucket-river-boat grandiosely called The African Queen, and fail miserably. Did I mention The African Queen is actually a dark comedy?

The script for the movie, which was written by James Agee, was left unfinished after he suffered a debilitating heart attack. Without an ending, there were several possibilities that were being hotly debated, some of which didn’t end well for the amorous couple. With the chemistry from Bogart and Hepburn lighting up the jungle, John Huston decided he did not want the characters killed off, so he brought in Peter Viertel to finish the script with an amicable ending.

Although Bogart wasn’t an especially great actor, he knew how to perform for a camera. In The African Queen, director John Huston was trying to get Bogart to step up his game. Hepburn’s character, Rosie, wanted Bogart’s character, Allnutt, back out into the water immediately after leaches had been removed from the last time he was in the water. Bogart said to Huston, “. . . I’ve got three looks, which one do you want?” In fact, Bogart’s character was supposed to be an East London cockney but Bogart couldn’t master the accent, so the character Allnutt was changed in the script to a Canadian. Canada was still under British rule during WWI. In many ways, Bogart was like Nicolas Cage and Christopher Walken, where the audience loved his personality as much as his acting ability.

John Huston was known for directing dark movies where the characters often fail. We find the same penchant in modern Hollywood. In failure, often a deeper meaning relating to our human existence can be extracted and cherished. Story writers and directors are always looking for these gems, however, whatever happened to trying to achieve something and then achieving it? There is something about that which is uniquely Americana. While Katharine Hepburn in her strong character roles was a little before her time, strong male actors like Bogart are quickly becoming a thing of the past. Yes, there are still strong male actors with action roles to play, but they are thinning out. Hollywood is becoming pacified, willing to settle for something less than winning. Bogart, in his era, was surrounded by a Hollywood full of strong male actors who could and did, with lots of available roles to play. With so much depressing glum coming out of Hollywood these days, it is refreshing to watch a movie classic like The African Queen where, even after failure, the main characters ultimately overcome their unique circumstances and win.